Media, Police, and the Invisibility of Black Women as Victims of Homicide 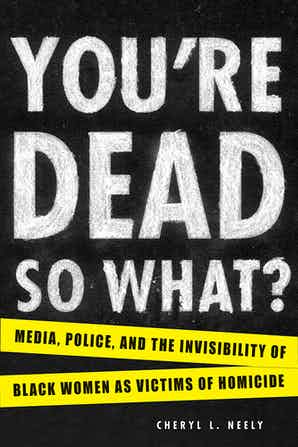 Recipient of the 2016 Midwest Book Award. Featured in an interview with Dr. Neely on NPR and the Southfield cable channel.

The media have the power to give voice to certain groups and to render others invisible.  In You’re Dead–So What? Media, Police, and the Invisibility of Black Women as Victims of Homicide, Cheryl L. Neely, a Professor of Sociology at Oakland Community College, analyzes the lack of attention given to black female homicide victims by the media and law enforcement. Neely discusses the symbiotic relationship between news and police agencies: the former raising awareness of cases, humanizing victims, stirring empathy among audiences, and thereby increasing public interest in crimes and pressure on law enforcement to solve cases; the latter investing time and resources into solving crimes, often relying on media coverage to generate leads from the public. Neely’s careful comparative analysis of various cases involving black and white female victims reveals that black women are more likely than white women to be victims of violent crimes and less likely to have the media cover their cases or have police take those cases seriously. Thus, black female victims do not receive the same institutional and representational privileges as that of their white counterparts, devaluing their often short lives.

Neely begins her five-chapter study by arguing that media representations tend to obscure the prevalence of black female victims through overrepresentation of white victims and perpetrators of color and underrepresentation of victims of color, especially black women. As a result, many believe white women are more likely to be victims of violent crime, which is not the case, creating a false sense of security among women of color. In addition, the media frames stories in a way that minimizes the humanity of black female victims, contributing to racist and sexist victim-blaming narratives. Neely explains that “story framing,” or the narrative created by the media about both the victim and perpetrator, is essential to prompting outrage and sympathy for victims, but also mirrors cultural norms. Undergirding these narratives are the historically racist, sexist, and classist representations of black women in popular culture which dehumanize them through caricatures and stereotypes, influencing public perception and determining how their lives (and deaths in this case) are framed in the press and handled by police. Neely skillfully demonstrates that the disparity in the amount of media coverage, and the bias in type of coverage, are both products of and reinforce institutional and cultural inequalities.

In Chapter Two, Neely compares media coverage of black and white female victims of similar violent crimes that occurred in the same city, in particular, analyzing the ways in which white female victims received not only more coverage, but more humanizing coverage. The media engenders empathy from the public in various manners, for example, by including pictures of the victim, listing their education levels and marital status, and describing them in ways that place value on their lives and contributions to society. Community fervor, in turn, pressures police to solve the crime. Neely reveals startling differences in the way the media frames the stories of black and white female victims, concluding that black female victims often receive less humanizing media attention than other groups, if their murders receive coverage at all. Through her case studies, Neely memorializes these forgotten victims while critiquing the media’s attempts to impugn their character and devalue their lives.

The media are resistant to admit that race plays a factor in which stories are told and how. In fact, Neely was unable to get reporters to talk to her about reporting strategies of newspapers. Her interviews with law enforcement officials in her third chapter, however, prove the media’s underreporting of violent crimes committed against black women, thus, perpetuating the notion that white women are more valuable than black women and leaving black women more vulnerable to predators who often exploit media bias and law enforcement apathy. Neely’s research counters the media’s self-perpetuating mythology of itself as an institution that is unbiased in its efforts to inform the public.

Popular notions argue that a predominantly white public empathizes more with victims who look like them (in this case, middle class, white, high social status), which then brings in increased ad revenue for news sources that publicize these cases. Neely analyzes three newspapers in cities with larger than average African American populations–the Atlanta Journal-Constitution, Detroit Free Press, and Washington Post–to see how they framed the stories of black and white female homicide victims. Altogether, white women were described more favorably, their stories given more prominent placement and longer lengths, and their case statuses updated or revisited more often. Even more shocking, many of the cases are strikingly similar, raising further questions as to why the black victims were not prioritized in similar fashion as the white victims by the very same media outlets. Ultimately, Neely posits that the media can stir empathy for victims of violence from marginalized communities through similar story-framing devices.

Neely rounds out her text by discussing social media efforts by community activists, especially those from communities of color, to raise awareness of black female victims in order to make up for what is lacking in mainstream media. Blogs like Journal de la Reyna, The Black Coalition Fighting Back Serial Murder, and What About Our Daughters have “pursued the outlets of social media and Internet blogs to voice their outrage and push justice for their victims” (72). These sources seek to humanize the victims, keep the names of missing or murdered women in the news, and encourage commitments by police to solve the crimes. This final chapter informs readers of alternative media outlets and furthers Neely’s argument that more representation by people of color behind the scenes can lead to more representation in media.

Scholars of race and gender studies will not be surprised by the conclusions drawn in Neely’s 100-page study. Nevertheless, the concrete qualitative and quantitative evidence make these claims salient and contribute vital data to scholarship which often neglects an intersectional lens. In addition, Neely’s study counters popular myths about media representation and police procedures. Neely grounds her analysis in Media Studies, Critical Race Theory, Black Feminisms, and Criminology, making it ground-breaking in its intersectionality; however, the monograph is a quick read making it ideal for the undergraduate classroom as well as more experienced scholars. The subject matter and readability also make it a vital and compelling read for those interested in the intersections of gender, race, and true crime. Barely containing her anger in some chapters at the injustices faced by victims and their families, and understandably so, she mirrors the emotions of equally impassioned readers. Although more thought could have been given to the title (this reviewer felt it resembled the titles of oft-derived clickbait articles), it does attract attention and spark discussion from curious passersby, which is perhaps its intention. Relevant because of the recent #SayHerName movement, which attempts to make more prominent Black female victims of violence, Neely’s text reinforces one of the philosophies of black feminist activism: to make the invisible visible.

Wendy Braun is a Senior Lecturer of English at the University of Tennessee-Knoxville. She is also the editor of H-NET's Southern Association of Women Historians network (H-SAWH), an online community of scholars, researchers, and teachers that focuses on the history of women and gender in the U.S. South.