As We Have Always Done

by Leeanne Betasamosake Simpson: writer, activist, faculty member at the Dechinta Centre for Research and Learning, and a Distinguished Visiting Professor in the Faculty of Arts at Ryerson University. She is author of several books, including Dancing on Our Turtle’s Back, The Gift Is in the Making, Islands of Decolonial Love, and This Accident of Being Lost. She is Michi Saagiig Nishnaabeg, holds a PhD from the University of Manitoba, and is a member of Alderville First Nation. 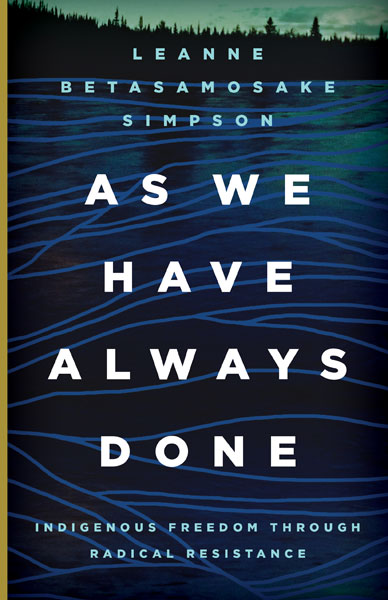 Leanne Betasamosake Simpson’s As We Have Always Done: Indigenous Freedom Through Radical Resistance argues for ways to embody Indigenous radical resistance in the struggle to refuse the settler-colonial dispossession of Indigenous bodies and land. Simpson argues for a “Radical Resurgence Project” that, she writes, is really “just Indigenous life as it has always unfolded” (247). As a set of practices, it is a return to Indigenous methods of political resurgence rooted in Indigenous thinking, theorizing, and organizing which do not seek the recognition of, or absorption into, the settler-colonial state (247). The solution to the settler state, and the future it presents to us, is an embodied Indigenous alternative that comes from “generative refusal”: emphatically withdrawing from the violence and injustice of settler colonialism while productively engaging in practices that can bring us into alternative futures. She considers the capacity for individual, everyday acts of resurgence to come together into what she names as “constellations of collective action,” creating new routes to Indigenous freedom. These everyday acts are how we can create “flight paths” or doorways that lead “out of the enclosure of settler colonialism and into Indigenous worlds” (217). Shifting towards practices that will create the necessary futures for queer Indigenous youth, Simpson focuses on place-based resurgent education using aki, which is land, water, the spiritual realm, and freedom itself. This pedagogy will create a generation of Indigenous people who are grounded in Indigenous intelligence rather than a westernized education system.

As We Have Always Done is a beneficial addition to feminist theory and queer studies curriculum as it presents readers with new ways to conceptualize heteropatriachy. Simpson identifies Indigenous children, women, and 2SQ folks as political orders who inherently challenge settler colonial futurities. Therefore, heteropatriarchy’s introduction is understood primarily as an impediment to Indigenous nation-building projects, as the colonial imposition of a gender binary works to exert colonial control from within Indigenous communities as well as to fragment the relationships which are vital to Indigenous knowledge and nation building. She argues for kwe (which can be roughly and inadequately translated to mean an Indigenous conception of womanhood) as a methodology in this practice of refusing settler colonialism. Locating Indigenous queerness as a unique and invaluable manifestation of Indigenous intelligence, she points out that “[q]ueer Indigenous youth are our teachers and our most precious theorists, even though they shouldn’t have to be” (144).

Bringing a two-spirit queer analysis to her traditional teachings is a thought exercise that broadens readers’ understanding of queer studies which has long been overwhelming white, as well as an exercise for Indigenous studies scholars to address how heteropatriarchy has come to be sedimented in Indigenous stories and practices. She uses kwe as method to intervene in dominant understandings of feminism and works to expand a feminist theory grounded in the important goal of decolonizing. It enhances the feminist curriculum but also reframes it, asking readers how we can take the feminist narratives we think we know and re-think them, re-frame them with a queer indigenous lens that shows us the material realities of gendered settler-colonial struggle. Simpson’s understanding of heteropatriarchy points to the direct connection between Native dispossession and gendered oppression challenging assumptions that still prevail around settler colonialism. In this way, As We Have Always Done fundamentally disrupts any alliance that feminists have with the settler-colonial state. Simpson reminds the reader that Indigenous resistance and resurgence require not only a refusal of state recognition; we must also refuse the state’s framing of the issues and the ways we come to see the world itself. Instead, we, Indigenous peoples and settler accomplices, need to productively engage with and embody alternatives.

Simpson’s book provides Indigenous resisters and settler accomplices with many new entryways to approach Indigenous struggles for sovereignty, as well as the feminist fight for gendered liberation. Speaking directly to Indigenous readers, she offers generative refusal: to withdraw from a politics of recognition and to instead turn inward to rebuild internally, to seek reciprocal recognition through meaningful relationships. She suggests that it is possible for Indigenous peoples to liberate themselves “into a physical reality that [is] entirely consistent with the one they [deserve]” (245).

In addition to its specific implications for political organizing, it is instructive on an individual level, as it compels us to not only refuse those practices and realities which are harmful but to actively create and embody an alternative to these harmful realities. However, Simpson cautions her readers that there are no easy answers to what exactly we must do to reach the future we deserve; she does not offer a “prescriptive” solution “because these processes are profoundly intimate and emergent and are ultimately the collective responsibilities of those who belong to unique and diverse Indigenous nations” (246). This cannot be accomplished simply by theorizing, writing, or dreaming up new futures but by consciously and actively creating a better present rooted in grounded normativities, because “Indigenous futures are entirely dependent upon what we collectively do now” (246).

As Michi Saagiig Nishnaabeg, kwe, and academic, Simpson lets us into her thought processes, entwining her own embodied experiences, cultural knowledges, and academic approaches. She offers us an alternative methodology for political resistance and a more comprehensive process for personal transformation. Furthermore, she shows that the two go hand-in-hand, as it is the everyday, personal acts of resurgence and resistance in the present-moment that constellate to bring about Indigenous futures. Her thinking in As We Have Always Done shows us how to begin to build these futures by both examining relationships between people and place and connecting the Native struggle for sovereignty with the gendered oppression women, trans, and two-spirit queer (2SQ) people face.

Katie Van Sleen, Salt Lake City, is a recent graduate from the Education, Culture, and Society program at the University of Utah. They are a local educator, artist, and community member.