Staying with the Trouble: Making Kin in the Chthulucene 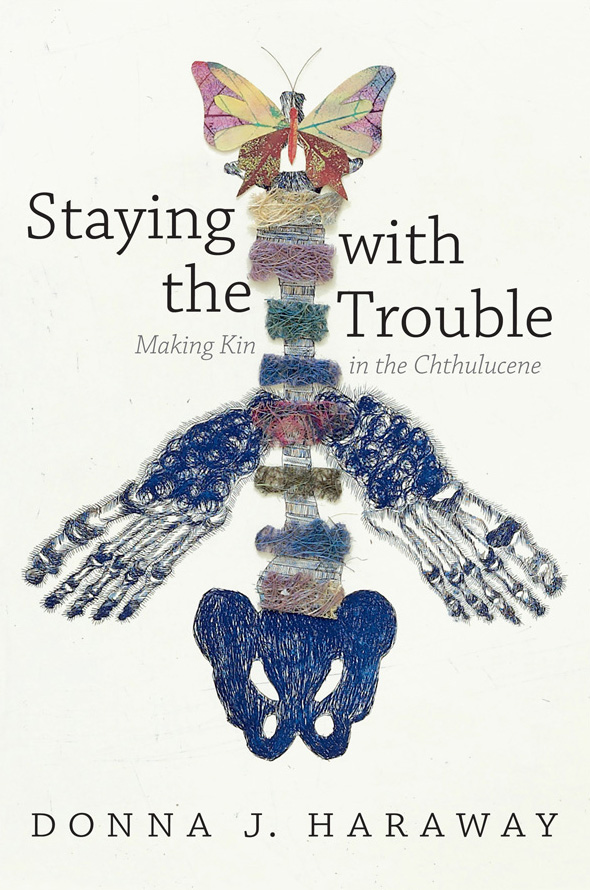 Haraway’s book deals with our troubled Anthropocene times, full of difficulties, with economic and political tensions, and the real perspective of ecological disaster. The authoress worries about the devastating connections between social changes and scientific progress with hyper-individualism, consumerism and free market logic. She reflects on new ways of thinking about the natural world, and its transforming biology, but above all she writes about the urgent need for responsibility and communality, and the necessity to create new forms of kinship in order to save oneself and the world.

Enumerating the research areas of this book, one must mention the broad litany of anthropology, philosophy of biology, ecofeminism, postfeminism, posthumanism, feminist studies on science and technology and animal studies. Haraway is creating a new discourse in her book combining her expertise as a biologist, with the sensitivity of a methodologically oriented philosopher who is conscious of the history of science, and with the literary grace of a writer. She refuses to recognize human uniqueness, but she does not want to think in posthumanist categories. She wants to abandon the categories of separate individuals and beings (species, orders, etc.) and instead she uses the categories of holobionts and symbionts which like in the case of cyborgs constitutes a new and refreshing ontological proposal.

The book consists of an introduction, eight chapters, a bibliography and an index. Most chapters have been previously published between 2012 and 2015 and this may disappoint the reader who expected a completely new, coherent whole. Only the last chapter contains previously unpublished material. The chapters constitute loosely related stories, in which similar themes are developed each time from a slightly different perspective. These stories center on the problem of subjectivity; overcoming traditional categorizations and divisions (using such concepts as compost, humus, and symbionts); problems with the Anthropocene, Capitalocene and Chthulucene, and the dynamics of biological research. Inevitably, parts of the book are written for different purposes and are of different length and structure: in some the author focuses more on conceptual matters, whereas others are case studies.

The last chapter entitled “The Camille Stories” addresses the extremely interesting problem of demographic and ecological threats resulting in economic and social crises. It is a linguistic product of the imagination, created at a writing workshop to produce an imaginable fiction without paying attention to traditional ontological divisions and existing real ways of living on the planet. Haraway’s story covers the life story of five , from the in 2025 to the fifth who dies in 2425. When the first Camille is born, there are eight billion people on Earth, when she dies there are already ten billion. When the fifth Camille dies, there are three billion people living on Earth, two billion of whom are human-animal symbionts, like some . Due to the overpopulation of the Earth, there is a policy to encourage bringing creatures other than human beings back to life. Although freedom of reproduction is retained, it is assumed that the appearance of each new life entails a change in the structure of the entire community, and it must, therefore, be part of this process. A new creature may choose a gender or not choose it at all, can freely transform the body, enrich it with microorganisms from the animal world, and expand its perception so as to experience the world as well as the animal creatures symbiotically associated with it. Due to its unusual content and style, the story is truly inspirational.

Haraway argues that we have to face these troubled times in which we happen to live, teeming with various problems, but to note they are difficult to grasp in thought. The point is that one should not only speculate about what will happen in the future, but also not postpone things for later, nor deny things that have happened (denial) or abandon the uncritical post- Enlightenment hope that techno-science will fix everything (technology fixation). This is symbolically represented by “Chthulucene” used in the title (assemblage of two Greek roots ‘khthôn’: land and ‘kainos’: new, refreshing); additionally referring to the figure of the ‘Pimoa cthulhu’ spider, a name in the Goshute language of the inhabitants of Utah underlining locality, and referring to an ocean-dwelling deity or octopus with many tentacles (emphasising plurality). Given the incredible human devastation of the natural world, and the uncertainty and unpredictability of the consequences of this devastation, the transitional period in which we now are on Earth must not be called Anthropocene. The notion of Anthropocene predominantly used by high-class intellectuals from affluent countries, hides demons of modernity, progress, determinism, division into nature and society, and to a large extent is supported by utilitarian individualism and the evolution of modern synthesis. Chthulucene suggests an alternative story in which people are not the most important protagonists, the story is created by the practices of many creatures. It is not a global, great and all-encompassing story, but a story without the tinge of apocalyptic panic and the complacency of a sated king. Haraway urges readers to think about making connections with non-human beings and ‘making kin’ which we cannot yet imagine. Taking into account the great sixth extinction of species, real overpopulation of the world, gigantic disparities, deadly pollution and littering of the environment, we will simply die without the construction of a heterogeneous community.

As a philosopher, Haraway uses rhetorical figures, including the all-encompassing “SF figure” referring to ‘science fiction’, ‘speculative fabulation’, ‘string figures’, ‘speculative feminism’, and ‘science fact’. It does not have a structuring role, its purpose is to strengthen the message, the same as in the case of over thirty illustrations decorating the book and its beautiful cover. Though this has significance not only to the rhetoric of the text – it is also invoked to show that science needs a and in turn feminism. Feminist threads are intertwined with the other issues raised in Haraway’s book. While presenting the problem of overpopulation she uses a catchy slogan ‘Make Kin, Not Babies’, explaining how environmental planetary problems resonate with feminist thought and activism demanding that women should have a choice as regards children. In need of and bonds, we have to focus on expanding our way of thinking about who our loved ones could be, with whom we are connected in a given place and time. The very important feminist issue of responsibility runs throughout the book, understood as developing the ability to respond. However, in order to respond adequately, we need to be able to see the incredible complexity of connections. Haraway provides the example of the (invisible) dependence of people on animals, describing her own experience of taking Premarin during the menopause. She expresses her feministic anxiety, recognizing that she was trying to fix oestrogen deficiency as closely related to the disappearance of her femininity defined as reproductive potential. Haraway sadly concludes that as a feminist researcher and a long-time animal admirer she had not noticed the fate of mares and their “single use” foals as sources of natural . As she , the relationships between ourselves and non-human ‘relatives’ are not innocent, and we are all responsible for the conditions in which different species live. But we are not responsible in the same way – everything depends on ecological and economic differences related to a particular way of life. critique of gender bias in science and the social order is the best example of sensitivity to details and hidden factors.

To sum up, Haraway’s book raises extremely important problems not only for the contemporary humanities, but also for the biological sciences. It poses the question of what concepts and theories should be used to describe today’s people; capture their hybridity, and their entanglement in technologies, economic relations, environmental changes, demographic processes, political and social crises. Is this a post-human living in an overcrowded dying world? Or a symbiont that tries to build new relationships? The author deals with conceptual problems of contemporary life sciences, their attempts to move away from the dictionary and theories founded on the categories of the individual and on the idea of rivalry. She calls for new ways of thinking, but her aim is not just another theoretical appeal and an attempt to build an original system of concepts, rather it is about collective action for revolutionary change in the current situation.

Having finished the book the reader will feel a bit lost: there is a lack of consistency, readymade recipes, and arguments that could be used. The structure of the book not accidentally reflects the actual state of our world. And about the need to do something now. For now we have to think about how to make kin, not babies. How to extend the family without overpopulating the world. It is really hard for starters…