2019 marked the fortieth anniversary of the Iranian Revolution. Yet the turbulent events of late 2019 and early 2020 are stark reminders that Iranians continue to resist for their liberation. These events once again confirmed that the history, legacy, and freedom dreams of the 1979 Revolution are still bitterly contested, forty years later. Since the very beginning of that uprising, the status of gender politics and its relationship to the revolutionary project has been a site of debate and contestation both among revolutionary actors and outside commentators. Unlike previous journal special issues marking anniversary moments of the Iranian Revolution, this collection of essays, art, and creative writing emerged over the course of conversations in 2019 that centered projects of gender justice, women’s leadership in popular struggles, and other forms of feminist political work which are a major force of societal transformation in Iran. 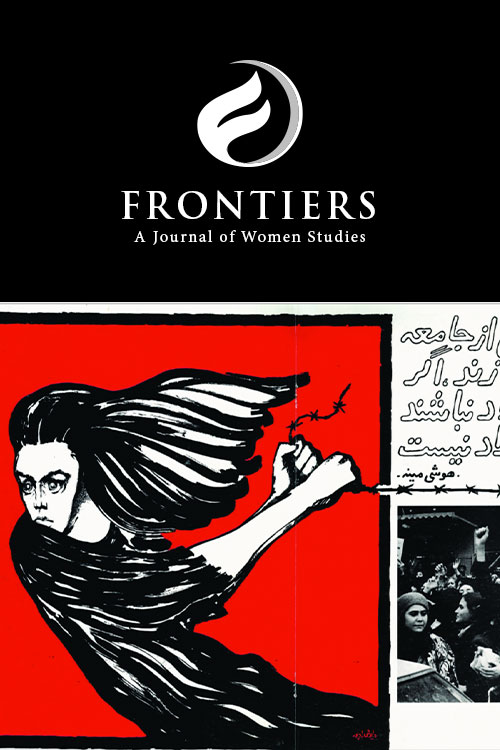 In this introduction, Guest Editor Alborz Ghandehari contextualizes the work featured in this special issue within Iranians’ current fraught political reality. What do we make of the fortieth anniversary year which witnessed yet another nationwide uprising in Iran that was met with deadly state brutality? How, once again, does heightened US militarism and intensified sanctions—including the US government’s unprecedented escalations to all-out war in early 2020—threaten to derail those very popular movements that continue to struggle for “bread, work, freedom?” For Iranians, the period between November 2019 and February 2020 felt as though history was being compressed into brief yet powerful flashes of violence and resistance on both domestic and international fronts.

How Cohabitation comes to embody the Affair between Law and Society

Verdicts of Science, Rulings of Faith

Her Creative Writings and the Iran-Iraq War

by Azadeh Tajpour and Orkideh Behrouzan

Alborz Ghandehari is an Assistant Professor-Lecturer of Ethnic Studies at the University of Utah. His forthcoming book, The Iranian Post/Revolutionary Condition, argues that Iranian writers, artists, and thinkers have provided powerful ideas for social change in the face of both state repression in their country and US interventionism. He has received recognitions for his work including awards from the American Council of Learned Societies and the American Studies Association. Some of his publications appear in the Critical Ethnic Studies Journal, the Journal of Middle East Women’s Studies, Jadaliyya, and Dissident Voice. Also an artist, he has showcased performance and film work in venues such as Golden Thread Productions, Salt Lake’s Spectra Arts Festival, and the “Building Bridges, Dismantling Borders” art show in San Diego. At the University of Utah, Alborz also serves as the instructional coordinator for the Diversity Scholars program, a college cohort program for underrepresented youth.

Azadeh Tajpour is a multidisciplinary artist based in Boston. She is a recipient of numerous awards and artist residencies, including the Massachusetts Cultural Council Artists Fellowship, The Studios at Mass MoCA, Virginia Center for the Arts, Boston Center for the Arts, Art Omi, and more. She has exhibited in Boston, Los Angeles, Mexico, Canada, the United Kingdom, and Iran. Her documentary Film, Gazing through a Lens—ʿAli Khan Documents 19th-Century Iran, has been screened at the Harvard Art Museums, Aga Khan Documentation Center at MIT, and Boston College. She is the senior editorial assistant at Women’s Worlds in Qajar Iran Digital Archive at Harvard University.

A Journal of Women Studies

The editorial team for Frontiers is committed to embracing emerging visions of dynamic and unsettled “feminist frontiers.” As the journal’s guiding voice, we seek to advance feminist investigations and expressions into the 21st century. Frontiers—as a term or topic of analysis—evokes differing memories, figurations, affects and emotions. Questions of “whose frontiers”, “which frontiers” and how is a “frontier” even formed, by who and where are debated and refused. While we participate in “frontiers” contested spaces, we simultaneously embrace the possibilities of thinking with and through frontiers as a way to foster and reinvigorate feminist and specifically women of color, queer and decolonial feminist theorizing, pedagogy and praxis. As an editorial collective, we bring expertise in performance studies, theatre, queer youth studies, education, policy, ethnic studies, indigenous studies, and gender studies. Building on our diverse strengths, we welcome feminist scholarly essays and creative works utilizing a multitude of methods, practices, discourses, and theories.